A gentle drizzle greeted me when I woke on Saturday morning a little east of Cle Elum.  Before I pulled out of my snug but unlovely campsite I took this panorama.

By 9am I had crossed under I-90, the mechanical river that is my unwitting companion for most of this trip, and made it to Stellas in Cle Elum where I had an excellent veggie scramble and coffee.

There I chatted with a woman was there for breakfast.

She squinted. “I grew up in Ellenburg and used to drive by Cle Elum all the time” she said dismissively. “Who’d have thought that ten years later I’d be living here” she said with a sigh. “Been here 20 years, but of course the locals still don’t accept me.” With that, she returned to her biscuits and gravy.

Stella’s filled up and I felt bad about holding down a table so I went outside to wait for my friend Sonja who was to accompany me on a short walk to Roslyn. The rain picked up a little and I got to try out my $4.95 poncho.

Soon Sonja arrived and we set off down the Coal Mine Trail to Roslyn.

Coal is the reason that Roslyn exists, and the Coal Mine Trail is what used to be the rail spur that took the coal out the main line. Gotta love these rails-to-trails!

Sonja was a great friend to drive all the way from Seattle for a 4-mile hike in the drizzle. 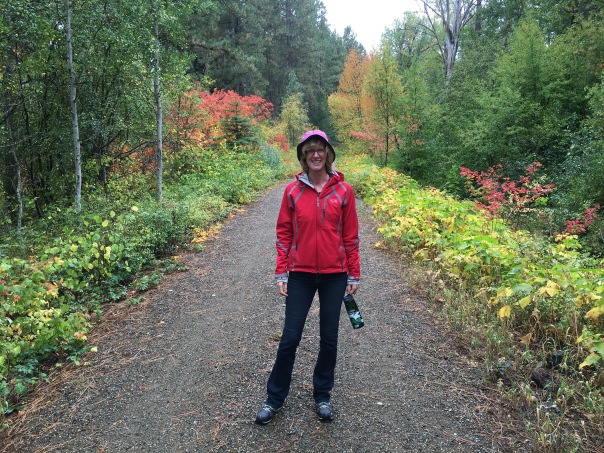 It was pretty though. Autumn was coming to the vine maple as we passed by.

Sonja and I discussed how much random chance affects our lives. I have lived in America for 30 years and will probably die here mostly  because a professor at Berkeley, who I happened to meet in 1985, said “You should apply to the Comptuer Science graduate program with us.” I did; I was accepted; and that was that.

Sonja’s husband Steve had a similar experience. Sitting in his high-school counselor’s office, Steve was helping the counselor sort through his mail. A postcard for a scholarship for study abroad in Japan was amongst the mail. The counselor flicked it to Steve and said “You should apply for this.” That trip to Japan opened Steve’s eyes to the world, and changed his view of his possibilities entirely.

In Rosyln we checked out the memorial to all the men killed in the mines. There were about a hundred of them over the relatively short life of the mine. We live in a much safer time. 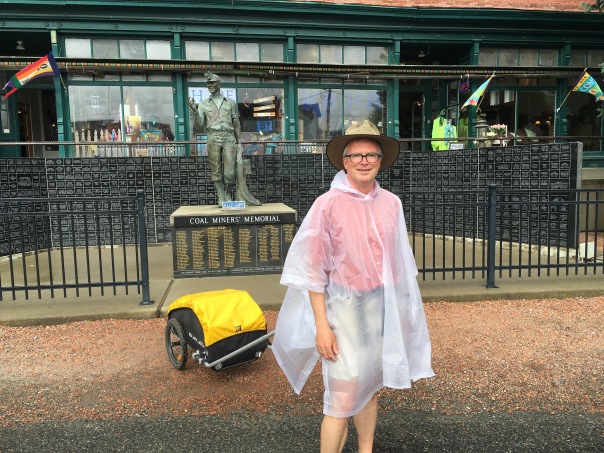 We had a great lunch at the Roslyn Cafe while waiting for Chris (known as Mrs. The Walker in this blog).

Chris arrived, had her own excellent burger, then we drove Sonja back to her car. Then it was on to our old friends Kelli and Curt at Suncadia.

Curt works in aerospace and makes a great business in brokering the launch needs of companies who want to put satellites up with the launch capacity of all the space programs in the world. We discussed Neil Stevenson’s Seven Eves, which features hundreds of pages about orbital mechanics, a topic critical to everything Curt’s company does. Why Stevenson is so fascinated with it is a little beyond me.

A delicious meal of quesadillas and baked berry desert, and then it was hiker-bedtime for me.

In the morning I kissed my sweetie  goodbye again, and Curt escorted me the 2.5 miles to the Iron Horse Trail on the other side of I-90.

The trail west from Suncadia  stays close to my old friend I-90 for the 10 or so miles into Easton. It was beautiful open grasslands only slightly marred by the roar of traffic close by.

After Easton the trail hugs the south side of the valley while I-90 hugs the north, so tranquility ensues. The Yakima is crossed several times, including on this cool new bridge. 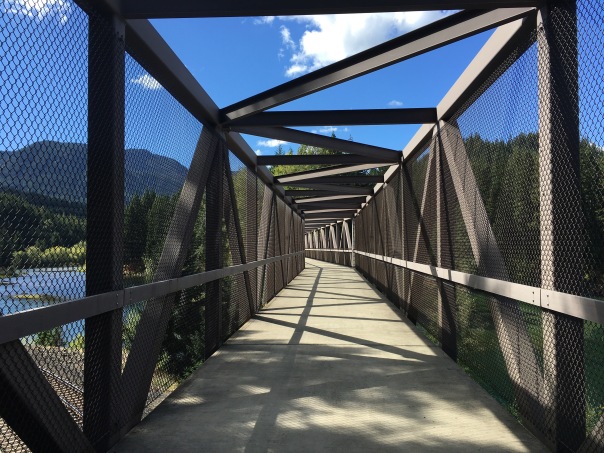 By 4:30 I had hauled 16 miles and that was enough. I set up camp on a mossy apron beside the trail and took in the sounds of the forest.

Today was my last full day east of the Cascades. Western Washington, here I come!